Anya Topolski on race after the Shoah 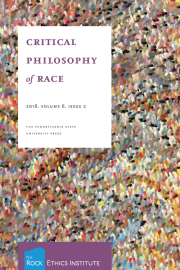 A really insightful and provocative review essay by Anya Topolski on Antisemitism and Islamophobia in Europe: A Shared Story? edited by James Renton and me, and Whites, Jews, and Us: Towards a Politics of Revolutionary Love by Houria Bouteldja. Some really nice words, and makes some important criticisms too.

Race remains a taboo term and topic in Europe today. This post-Shoah silence is both political and, until very recently, academic.1 The two books under review aim to break this silence by tackling the complex and entangled questions of antisemitism, islamophobia, and white (Christian or secular) supremacy and to demonstrate that racism in Europe cannot be separated from the question of religion (and I would add well beyond Europe). The essays collected in Antisemitism and Islamophobia in Europe: A Shared Story?, edited by James Renton and Ben Gidley, provide the rich histories and complexities concerning the race-religion intersection, in terms of [End Page 280] the shared stories of antisemitism and islamophobia, in Europe.2 Whites Jews and Us: Towards a Politics of Revolutionary Love, by Houria Bouteldja, is a passionate political appeal for action against the violence, exclusion, and power games experienced by excluded groups in Europe today.3 Read together, these two books offer a theoretical and applied analysis of racism in Europe today.

Let me first provide the reader with a summary of the contents. When Renton and Gidley selected and edited this volume, based on the proceedings of a 2008 conference, what was their ambition? With the nuance of erudite scholars, nuance sometimes lacking in Bouteldja’s book, Renton and Gidley refuse to take up the question of the complex relationship between antisemitism and islamophobia in a reductive or simplistic manner. Is it possible to focus on similarities without sacrificing differences or vice versa? The approach chosen by the editors is, in this vein, judicious. “We have to excavate and concentrate on a shared story of evolution; in short, we need a diachronic framework, in which we can identify moments of beginning, change, separation (6).” The aim is thus to focus on how this relationship has changed or unfolded over time which leads to the four-part diachronic structure of the book: Christendom, empire, divergence and response. While I welcome the aim, it might have been too ambitious as it would have required more active engagements with the respective contributions and an editorial conclusion. As it is, several of the essays feel rather misplaced. This is unfortunate as the structure and aim creates possibilities that would have been both timely and relevant. One concrete example is that of antizyganism. While the editors, and several authors, mention discrimination against the Roma, none consider how the exclusion and persecution of Roma might be related and entangled in this relationship—precisely because of the diachronic structure, this might have been possible.

Senior Lecturer at the School of Social Science, History and Philosophy at Birkbeck, University of London. END_OF_DOCUMENT_TOKEN_TO_BE_REPLACED
This entry was posted on Tuesday, July 17th, 2018 at 11:11 am and tagged with Antisemitism and Islamophobia in Europe: A Shared Story?, Anya Topolski, Critical Philosophy of Race, Houria Bouteldja and posted in Antisemitism, Antisemitism and Islamophobia in Europe, Europe, Intolerance and racisms, Islamophobia, Jews and Muslims. You can follow any responses to this entry through the RSS 2.0 feed.
« The vicious circle of Islamist terrorism and far-right extremism
From the archive: Passages Through Dark Times »