From the archive: Passages Through Dark Times

Been going through some of my old stuff, and found some stuff from the CUCR magazine Street Signs (archive online here). This is from page 18-19 of Volume 1, Issue 5, Spring 2003. The issue also has a lovely interview with Paul Gilroy about The Streets, Fran Tonkiss on “inner city values”, Michael Stone on Laurie Grove in New Cross, Les Back interviewing M Y Alam, Hiroki Ogasawara visiting Walter Benjamin’s grave, and a beautiful celebration of Flemming Røgilds.

The article below describes my first proper academic conference, in Leipzig, and reflects on the relationship between Jews and the left in the darkness of the 20th century, and how that darkness is remembered by historians and leaves its traces in urban space. Since I wrote it, some of the people in it have passed away, including Arnold Paucker in 2016 (age 95). 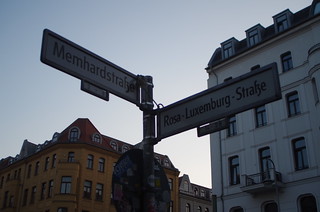 “You who will emerge from the flood in which we were drowned remember when you speak of our weaknesses the dark time from which you escaped…
Remember us with forbearance.”
–Bertolt Brecht “To Those Born After Us”

“Even in the darkest of times we have the right to expect some illumination, and such illumination may well come less from theories and concepts than from the uncertain, flickering, and often weak light that some men and women, in their lives and in their works, will kindle under almost all circumstances and
shed over the time span that was given them on earth…”
–Hannah Arendt “Men in Dark Times”

The transit bus from the airport into Leipzig arrived at the exact time given on the time-table. The bus glided through the flat monotony of the Saxon countryside, entering a zone of urban sprawl, in which it was impossible to distinguish which low-rise concrete box contained homes and which contained factories, warehouses, offices. The grey postindustrial landscape was punctuated here and there by Vietnamese signs, testimony to the historic links between East Germany and Communist Vietnam.

From the bus station, we crossed over the no-man’s land of a wide ring road (“good for tanks”, as my Yiddish teacher, Gennady Estraikh, pointed out – a fact he knew from the bitter experience of living most of his life in the Soviet Union) into the beauty of the baroque town centre. Since reunification, Leipzig has been a jewel in the East’s crown, receiving heavy regeneration investment. “Leipzig is coming” is the bizarre slogan of the tourist office, which describes it as a cosmopolitan, multicultural town (not something apparent from the faces of the people I passed on the street).

It was Autumn 2001. I was in Leipzig to participate in a conference, held at the Simon Dubnov Institute for Jewish History and Culture, entitled “Jewish Questions, Communist Answers”, about the historical relationship between Jews and Communist parties. I was anxious about giving my first proper conference paper – especially as I was scheduled into the opening slot, at 9 a.m., sharing a platform with some of the most distinguished scholars at the conference. As it turned out, post-September 11 fear of flying had kept away many of the American delegates, including the one I was most scared about sharing a session with. The absence of Americans, however, also meant that the dominant language shifted from English to German, leaving me feeling a little marginal – something non-English speakers regularly experience in the often American-centric academic world. As with many European academics, most of the conference participants were able to slide with ease between languages. But the multi-lingualism of the conference delegates was part of something different.

Historically, Jews have existed in the cracks between nation-states, at the margins and borderlands of empires, at the cross-roads of languages. My great-grandparents’ families, for example, living in Belarus in the late nineteenth century, spoke “mame loshn” (mother tongue – Yiddish) in the home, “loshn koydesh” (the holy tongue – Biblical Hebrew) for prayer and study, Polish in the market-place, German to the landlord, Russian to the political authorities. This was something very ordinary; many intellectuals would have learnt other European languages too. Historically, Jews have also been a migrant people, and the storm which was the twentieth century – the age, as Hobsbawm puts it, of extremes – intensified this.

The people at the conference were people whose lives have been touched by history in a way that most English
people’s lives simply have not. There were men who were born as stateless, displaced people, their childhoods spent in refugee camps across Europe. One man was a “refusenik”, a Jewish Soviet citizen refused the right to emigrate. There was a Czech-born man, who had recently returned to his hometown after living in exile in Germany since the Prague uprising of 1968. There was Victor Karady, the distinguished Hungarian sociologist, who had recently returned to his country after living in exile in France since the Hungarian uprising of 1956. A Croatian historian told me of his participation in a Serbo-Croat historians group, which alternates its meetings between Zagreb and Belgrade; the group met one year in Zagreb while Serb forces bombarded it, another year in Belgrade while NATO bombs fell around them. Jack Jacobs, an American scholar in his fifties, whose son’s school was at the very edge of September 11th’s “ground zero”, told me of his Bronx school days: every afternoon after normal school he’d go to the Bund school (organized by the Jewish labour movement) where classes were taught in Yiddish. At weekends, he would translate for his grandmother, a survivor of the Nazi occupation of Poland, as she did the weekly shopping in the neighbourhood’s Latino-run stores. Ordinary people made extraordinary by the dark times through which they lived.

One particularly impressive person was Arnold Paucker, an octogenarian retired academic. He was born in  Berlin, fleeing as a teenager to Palestine after Hitler came to power, serving in the British Army there, before making his home in North London. Along the way, he had been friends with the biographer Isaac Deutscher, the philosopher Isaiah Berlin and the historian Chimen Abramsky, and studied at Jerusalem’s Hebrew University under Martin Buber. Sitting in the quiet of an academic seminar room, with his tweed suit, white hair, heavy Continental accent and sparkling eyes, he transported us during his talk to the campfires of totalitarian Europe’s resistance fighters. He spoke movingly of his friendship with International Brigade volunteers who fought against Franco in Spain, with Yugoslav partisans who fought against Nazi occupation, with Communist rank and file soldiers in Hitler’s army who found some small and some large ways of resisting fascism.

Conference papers spoke of the lies that Jewish Communists told themselves about their Jewishness in order to hasten the coming of that proletarian dawn in which all ethnic identities would melt away like dew. Other papers spoke about the bravery of rank and file Communists who endured under the terrors of Hitler and Stalin, or of dissidents who painfully lived the gap between their Marxist commitment and the brutal reality of Stalinism. At times, contending histories and contending memories clashed in the conference debates. One Polish delegate had kept his academic post through the anti-Jewish purges of 1968 (the purges which forced Zygmunt Bauman into exile) while another had fled to Paris. The former lost his job when Communism fell; the latter returned in triumph as a leader of Solidarnosc. Behind their scholastic arguments as historians over events in postwar Poland, you could hear the reverberations of conflicting personal histories, conflicting political biographies.

The urban fabric of Leipzig likewise bears witness to these contending histories. Place names honouring the pantheon of socialist heroes – among those still left are Clara Zetkin Park and Rosa Luxemburg Strasse – become sites of struggle over memory. The former Communist Party, now the party of Democratic Socialism, unsuccessfully resisted Georgi Dimitroff Platz, named for a Bulgarian anti-fascist and Communist, being renamed in honour of Eduard von Simson, a Jewish jurist and politician and native of Leipzig.

Like Alan Bennett’s Leeds or Walter Benjamin’s Paris, Leipzig’s central streets are connected by a network of arcades (passagen), covered shopping alleys built mostly in the nineteenth century. Some of them are now dark and dusty, passages into a period of history which neglected Leipzig’s heritage as a city of commerce and trade. Others are bright and shiny tourist meccas, spruced up by the post-Reunification heritage industry, passages into the coming future which official Leipzig imagines for itself. The arcades provide alternative pathways for traversing Leipzig’s cityscape, connecting streets which would otherwise run along parallel, never meeting. They also connect different narratives of the local urban past. In rescuing the memory of rank and file Jewish Communists (and Jewish victims of Communism) erased from official accounts, the narratives spoken at the conference were also passages, arcades, connecting parallel histories, alternative pasts and futures.

Also in the issue was a selection of what some colleagues were reading that year, including Kate Nash, Suki Ali and Paul Halliday. Here was my contribution:

The books I enjoyed reading most this year were crime writer James Ellroy’s adrenaline- and amphetamine-fuelled LA Quartet, a series of four novels set in post-war Los  Angeles. The books dizzyingly mix real characters (like Howard Hughes, mobster Mickey Cohen and J Edgar Hoover) with a gallery of fictional dysfunctional racist cops, Mafiosi
and perverts, to a soundtrack of mad bebop and lounge crooning. The first in the Quartet is The Black Dahlia, based on the true (and gory) story of the murder of a young woman, whose horrific death had uncanny similarities with the murder of Ellroy’s own mother a decade later – told against the backdrop of an alternative political economy of the emergence of Los Angeles’ spatial form. Then, in The Big Nowhere, Ellroy takes on McCarthyism, homophobia and film industry corruption, as well as a love story. LA Confidential covers porn, prostitution and more gore. Finally, there’s White Jazz, of which the story goes that when his editor asked Ellroy to shorten his 900-page work to 350, he did so by eliminating the verbs.

Senior Lecturer at the School of Social Science, History and Philosophy at Birkbeck, University of London. END_OF_DOCUMENT_TOKEN_TO_BE_REPLACED
This entry was posted on Wednesday, August 22nd, 2018 at 6:13 pm and tagged with Arnold Paucker, Bertolt Brecht, Communism, CUCR, Gennady Estraikh, Jack Jacobs, James Ellroy, Leipzig, Street Signs, Victor Karady, Yiddish and posted in Germany, Jewish radicals, Jews and Jewishness, Poland, Urbanism. You can follow any responses to this entry through the RSS 2.0 feed.
« Anya Topolski on race after the Shoah
From my archive: On being haunted in the city »